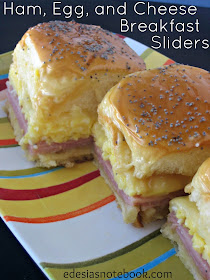 It's time for this month's Secret Recipe Club! The Secret Recipe Club is a group of food bloggers who secretly make one of someone else's dishes and post them all on the same day at the same time.  It's really fun, choosing a recipe to make, making the recipe, then reading about everyone else's recipes.  It's a great way to "meet" other bloggers and check out some great blogs that you never knew about before.

This month I was assigned Nicole's blog Daily Dish Recipes.  I was well-acquainted with Nicole's blog and have actually made one of her recipes before, Avocado Bacon Ranch Pasta Salad.  Nicole has an amazing collection of recipes! In fact the recipe that I chose for this month's challenge was her 1,000th post.  Wow!  That is so impressive.  While I could have happily made any one of those 1,000 recipes, I chose to make her Saucy Ham and Cheese Breakfast Sliders.  I love those little ham and cheese sliders made with King's Hawaiian rolls, and I've made a beef and bleu cheese version too, but I never would have thought to do a breakfast sandwich that way.  Pure genius!  My stint as a purely stay-at-home-mom has ended as I have taken a part-time job.  So the mornings when we all have to be ready and get out the door at the same time are a little hectic.  So the thought of making 12 breakfast sandwiches all at once really appealed to me.

Slice the rolls in half and put the bottom halves in the baking dish.  Brush them with about half of the butter mixture.  Lay the ham slices on, overlapping a little.  Put the scrambled eggs on top the ham, spreading them out evenly.  Top the eggs with slices of cheese, overlapping this as well.

Put the top halves of the buns on.  Brush the remaining butter mixture all over the tops.  Sprinkle with poppy seeds.  Cover dish loosely with foil and bake for 15-20 minutes or until cheese has melted.  Remove from oven and let cool for about 10 minutes.  Using a sharp knife, cut rolls apart and serve warm. 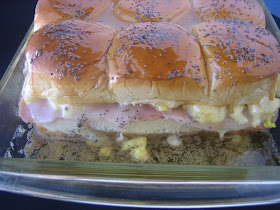 These would be great for serving at any type of a brunch function (bridal or baby shower, etc), but they are also perfect for every day breakfast at home.  I assembled and baked these one afternoon, then popped individual sandwiches in the microwave every morning for the rest of the week.  Awesome!  They are not only cheaper than any kind of frozen breakfast sandwich you can buy, but so much tastier too!  They were a big hit with my husband and six-year-old daughter.

I made one small addition to Nicole's awesome recipe.  The thing we love most about those ham and cheese sliders is the sweet glaze that they are baked in.  It's a combo of butter, brown sugar, Worcestershire sauce, and a little Dijon.  Nicole's glaze didn't call for any sweetness, but I knew my husband and daughter would like it better with some, so I added a bit of real maple syrup.  I felt the syrup gave it a more 'breafast-y' taste than brown sugar would.  And the results were awesome.  Just the right amount of sweetness to go along with the salty. 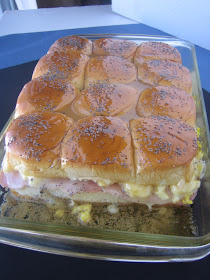 Nicole used cheddar cheese, and I think that is probably the best cheese for these sandwiches, but I was out of sliced cheddar and really, really wanted to make these that day, so I used provolone instead.  They were still good that way.  I really think you could use any cheese you like. 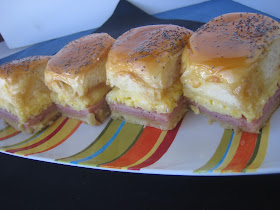 My family loved these sandwiches so much, I know they are going to become a breakfast staple at our house.  I am so happy to have found a recipe that makes my life so much easier on super busy mornings.  Thanks Nicole!